The Squadron has recently changed its name

If you are a parent of a cadet currently on Squadron, you will be able to find a full letter for the France trip (and a form for the deposit payment) on the '1206 Parents Page' as well as at the bottom of this post.

If you are a current parent of the Squadron, please find the letter on the below and on the parental page. If your son/daughter are looking to join us in our February intake and you are interested in your son/daughter going on the trip, please download the letter below and get in touch with Fg Off Richard Hartland whose contact details are on the letter. 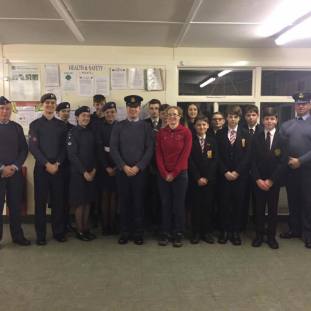 Tonight we sadly had to say goodbye to a member of staff from our squadron, Sergeant Kerr. Since 2013 she's always been there for the cadets,
taught fantastic first aid and even arranged visits to Whitemoor Lakes for us. She will be missed around the squadron. Good luck in your new job up in Edinburgh!

What've we been up to?

Fantastic week had here at 1206. Whilst Senior and Master Cadets were studying and taking exams and Leading Cadets were learning Navigation skills, our newly appointed Wing Sector Commander Flt Lt Haynes had an opportunity to have a look around the squadron and meet the staff.
The cadets also had an opportunity to hear the Staffordshire Wing plan for the future.
Congratulations to Cdt Massey who was presented with her First Class certificate & Cpl Hall who received his senior classification certificate.

Monday saw our new recruits join us and all passed their HeartStart First Aid - a great start to their ATC experience. Well done!
We also enrolled Cdt Massey, who took her cadet promise in front of the Squadron, and Cpl Quinby was promoted to Sgt. Cpl Fowler and Cpl Hall were also presented with their First Aid badges.
Finally, a big welcome to CI Lowe who received his CI certificate and HeartStart First Aid certificate - welcome to 1206 (Mercian) Sqn. 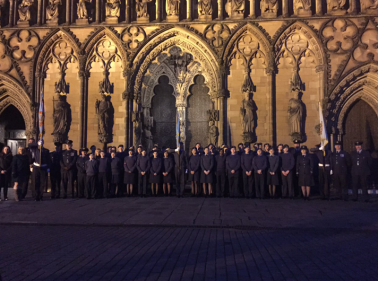 On Sunday 5th February, cadets from 1206 joined a variety of cadets and staff from 1444 (Brownhills) Squadron, 196 (Walsall) Squadron and 1200 (Polesworth Squadron) at Lichfield Cathedral in order to celebrate ATC Sunday. Cadets were enrolled and prayers were read, and all the cadets renewed their cadet's promise. It was great for 1206 to be back once again in their 'adopted' church, with the service taken by 1206's own Padre, Canon Andrew Stead.

An evening of DofE and First Aid...

This evening, Cpl Meer and Cadet Ray gave their presentations on their Duke of Edinburgh Bronze expedition and talked about their experiences of DofE and what it's all about. We also had ex 1206 CWO Tom Brittain join us to discuss how he achieved his Gold. The squadron then practiced their skills of putting up a tent in moon light (With a little help from an iPhone torch!)
The staff were also busy with HeartStart training. Massive thank you to Sgt Kerr that made the journey back up from London for the evening to train everyone! 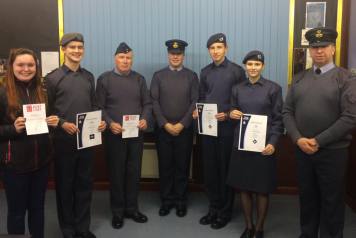 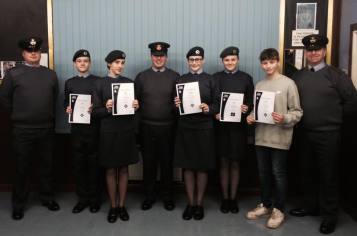 Great start to 2017, congratulations to Cdt Hinsley, Cdt Wright, Cdt Pemberton and Cdt Mckeever who were presented their First Class certificates and Cpl Meer who received her Leading certificate!

Welcome to 1206 (City of Lichfield) Squadron

1206 (City of Lichfield) Squadron is based in Lichfield in Staffordshire and has a thriving community of Air Cadets, uniformed staff and Civillian volunteers.

The Squadron has a long history, celebrating its' 50th anniversary in 2013.

Getting involved with the community and achieving successes are among our objectives. Take a look at the 'Squadron News Gallery' and the Squadron Twitter feed for photos and news from recent events.

As part of one of the largest youth organisations in the country we are tremendously proud of our Squadron and really feel that our positive attitude, sense of friendship and fun delivers a highly professional and rewarding environment.

The RAF Air Cadets enables young people to experience many exciting activities such as gliding, shooting, Duke of Edinburgh expeditions and a host of other activities all designed to increase confidence and get you set for your chosen career when you leave school, college or university.

Every week our cadets aged 12 (Year 8) to 19 from all sorts of backgrounds get involved in everything the RAF Air Cadets has to offer. If you live in Lichfield, the surrounding areas or you go to school here and want to get involved, get in touch with us. We really want to hear from you.

Who knows, next weekend you could find yourself going flying, gliding, shooting, on an expedition, parachuting, playing sports, parading, or camping.

The sky is literally the limit.﻿