Everyone in the Air Cadets can be identified by the badges of rank that they wear. Cadets are given a rank as well as a classification.

From lowest to highest, the classifications go as follows;

From lowest to highest, the ranks go as follows; 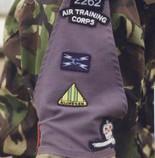 An Air Cadet 'brassard' including the Nijmegen badge, a communications badge and a Wings Marksman badge

The brassard's main purpose is to distinguish which service and squadron or unit the cadet belongs to, as well as his or her classification. It is also one of two parts of uniform that shows any awards the cadet has achieved in the Air Training Corps. 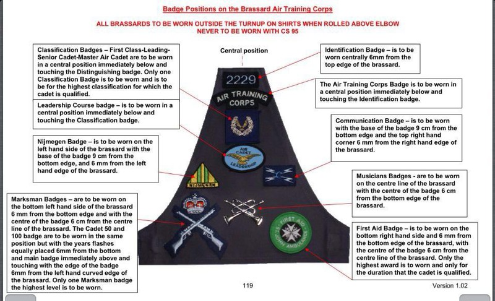 The positioning of a variety of badges on the brassard e.g. Music, Marksman, First Aid etc.

Badges on the brassard;

The identification badge (Squadron number) is to be worn centrally on the brassard, 6mm below the top edge of the brassard. In this position it covers the button hole.

The distinguishing (Air Training Corps) is to be worn centrally on the brassard, immediately below the identification badge.

The First Class, Leading and Senior Cadet badges are to be worn centrally on th brassard, immediately below the distinguishing badge. Only one classification badge is to be worn at a time and it should be the highest classification the cadet holds.

The Bandsman badge is to be worn on the brassard, in a central position 75mm above the lower edge. Bandsman's badges are only worn in this space where higher priority badges have not been gained. There are four bandsmen badges; Drummer, Trumpeter, Instrumentalist and Piper.

A 'Corps Marksman' Badge
Badges for Shooting
Only one Marksmanship badge is to be worn and is to be for the highest level for which the Cadet is qualified. The appropriate badge is to be positioned 6mm from the left hand edge of the brassard. 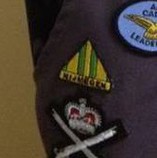 The St. John Ambulance First Aid Badge is to be worn on the right hand side of the brassard so that it is highly visible.

The Green Activity First Aid Badge should be worn instead of the Red Youth First Aid badge if it has been awarded.

Extras; NOT worn on the Brassard:

The yellow lanyard is worn with the cord fastened over the left shoulder, under the shoulder strap and fasten to a small raised, RAF crested black button sewn centrally on the bottom edge of the left shoulder patch of the jersey - in shirt sleeve order it is fastened to the button of the left breast pocket of the shirt.

Cadets who graduate from the Junior Leaders Course will be awarded a maroon lanyard. This will be worn as the same manner as the Instructor Cadet lanyard. If a Cadet is qualified for both lanyards, only the Junior Leader lanyard should be worn. 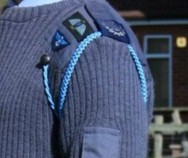 'Qualified Aerospace Instructors Course' lanyard. Cadets who graduated from QAIC will be awarded this blue lanyard.

It is to be worn in the same way as the other two lanyards, however is the most senior of the three.

If a cadet is qualified for both lanyards, the QAIC lanyard should be worn.

Cpl, Sgt, FS and CWO badges are to be worn on the shoulder straps of either the jersey or the shirt, depending on the mode of dress.

'D of E' badges are to be worn centrally on the right shoulder patch of the jersey, 1cm above the lower edge of the patch. Only one D of E badge is worn at a time i.e. when the Silver is gained, it replaces the Bronze. 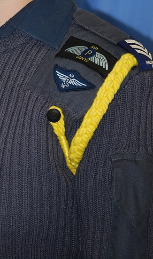 Gliding, Flying Scholarship and Cadet Navigator badges are to be worn on the left shoulder patch of the jersey as follows;