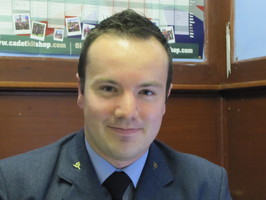 Flight Lieutenant﻿ Chris Kelly is the Officer Commanding 1206 (Mercian) Squadron and is probably the best advert for what being in the Royal Air Force Air Cadets can do for your career and self confidence. A local Lichfield lad having lived here for most of his life, he joined 1206 in 2000 and worked his way through the ranks, making Flight Sergeant before eventually passing out at RAF College Cranwell as an adult instructor to become the squadron’s new Training Officer.

His life as a cadet was filled with visits to RAF stations around the country, included RAF Valley, Brampton, Wyton and Henlow where he got hands on experience working with engineers on a Bae Hawk T1 and getting a rides in a C130 Hercules and a Sea King helicopter. Chris’s best moment was taking the controls of a grob tutor (single prop trainer), flying over Liverpool City Centre and with a little assistance, doing a 'loop-the-loop' and thinking “I hope I don’t crash this, it’s a few years pocket money to replace it!"

Since 2008 Chris has been commanding the Squadron and has instilled a real sense of pride and camaraderie within the ever increasing group of cadets.  “They must be enjoying it as they keep coming back for more” he says, and judging by the intensity of the activities interspersed with fits of laughter you can see why.

You’d think that running 1206 is a full time job, and it is! But Chris also finds time for his day job working in the sales team at Hollywood Monster. And it doesn’t end there, he also gets involved in The Lichfield Bower and The Birmingham Tattoo. “We all work hard and play hard here at 1206 so it’s nice to take a few hours off and catch some social time with the team, they are a great bunch of people”.

When you meet Flight Lieutenant﻿ Kelly you can only be impressed with his enthusiasm and dedication. He puts his success in the Squadron and indeed to his civilian job to the grounding he got as a cadet that has left him with a legacy in leadership and management that will be with him throughout his career.