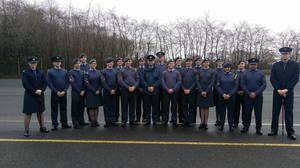 The Cadets Drill Course is a core qualification which allows cadet NCOs who have passed the course to instruct drill to the standard of AP818, the RAF Drill and Ceremonial Manual. The course itself covers a variety of subjects such as uniform, personal drill and the qualities of a drill instructor.

I found the course to be very educational and informative, but a bit daunting as the course required constant focus to learn the drill manual and pass the examinations. The directing staff, FS Church and FS Rowlands, were enthusiastic and focused on delivering the course content from Friday night up until Sunday afternoon on final parade, which certainly made the course a lot easier for me.

The course itself was made up of several different modules, including a preliminary drill theory written exam on the Friday night, a personal drill assessment on Saturday morning, learning the drill teaching practice on Saturday then an exam on Sunday. Uniform inspections were also given on Saturday and Sunday.

Over all I found the course very rewarding as I learnt a lot, not only about my own drill and uniform but also many things that I could take back to the squadron to help improve the standard of drill and uniform at 1206.

What do you know about RAF Lichfield?

Royal Air Force Lichfield was a WW2 airfield situated to the east of the City of Lichfield alongside the small village of Fradley. It was built to a standard which was classed as 'temporary', which meant emergency short term use for the duration of the conflict. Most buildings would be quickly built with buttressed single walls with no damp proof causes. Hangars would be simple portable metal structures bolted together and erected on site. 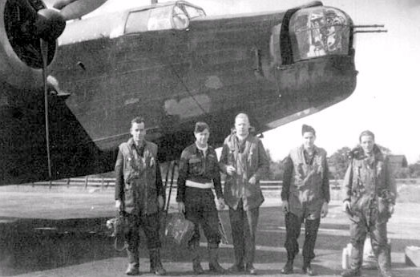 RAF Lichfield 27 OTU was a bomber training squadron using Vickers Wellington training aircraft (shown here) in this picture taken at Fradley in 1941. The author of No Moon Tonight, Don Charlwood is on the far left

Construction work on RAF Lichfield started in 1939 using one or more private contractors who would have won an Air Ministry contract. There were many contractors who worked on the airfield and some very well known contractors still exist today, for example Balfour Beatty.

For more information on RAF Lichfield, head to this link! 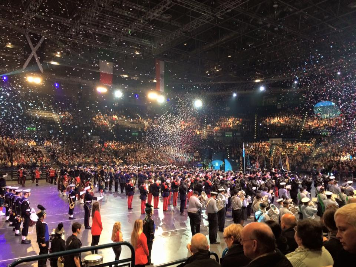 At the end of November the cadets of 1206 attended the Birmingham International Tattoo at the Barclay Card Arena. This is an event that takes place annually and consists of many different acts. There were a variety of bands from around the world, dog display teams, singers, field gun teams and hundreds of dancing children, and, of course, not forgetting the cadet appearances.

We spent the majority of the first day practicing the opening and the finale, before having a quick break and starting the first night. The arena filled up quickly and the opening parade of standards started with standards from around the UK on parade and cadets lining the edge of the arena before marching off to watch the events. A few selected cadets from our squadron were allowed to help setting up the dog teams event, allowing us an up close view from the sides of the arena.

After watching the many amazing acts we headed backstage for the finale. The lights were dimmed and the curtain was risen as all the acts fell perfectly into place (although this took a lot of practice!) The finale ended with a lone piper as we all marched off to a wave of applause.

The event was held over two days and on the second day the arena was full. This event is a great event that is held every year and the more people that attend, the better. It is definitely one of my most anticipated events each year.

Michael Fabricant has been appointed Squadron President of the 1206 (Mercian) Squadron Air Training Corps in Lichfield.

“I am genuinely delighted and honoured to have been made Squadron President” says Michael. “The Squadron provides real focus for the Cadets and can have a justifiable pride in what they do."

“The Squadron is flourishing and with a recent growth in cadet numbers to 64, the Lichfield Squadron is now the largest in Staffordshire. It has enabled the formation of its own Corps of Drums, as well as enjoying huge success in the areas of flying, Duke of Edinburgh, sports activities, shooting and leadership. All these activities are designed to increase personal confidence and leadership and team building skills which helps get young people of Lichfield set for their chosen career when they leave school or move on to college or university or, indeed, join the Royal Air Force." 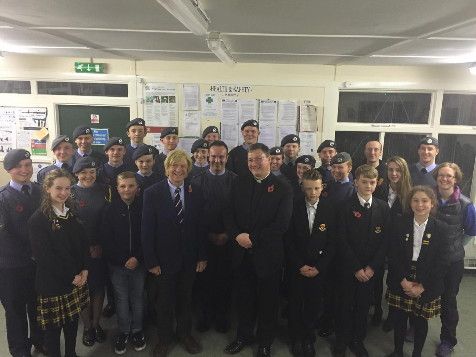 The cadets of 1206 and their Squadron President, MP Michael Fabricant 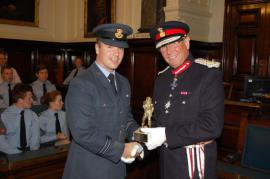 Flt Lt Kelly receiving the Best Sqn of the Wing 2014 Trophy on behalf of 1206 (Mercian) Squaron from HM Lord Lieutenant. Well done everyone!! 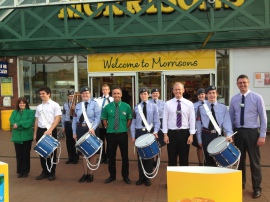 The 100th year anniversary of the start of the First World War is in Ypres in Belgium. The Squadron have been invited to attend the ceremony and the Corps of Drums will be performing by the Menin Gates. The trip is self funding and the staff and customers of Morrisons were on hand to help. 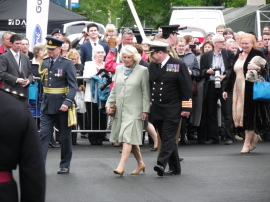 The Squadron attended the opening of DMS Wittington with the Corps of Drums playing before a packed audience of dignitories. Guest of honour was Her Royal Highness the Duchess of Cornwall. 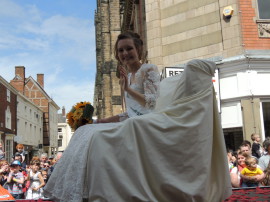 The Bower Parade is a splendid pageant where the local organisations come to honour Lichfield. Especially marked this year by the crowning of the Bower Queen who is an RAF Air Cadet. Congratulations Bethany Daire. 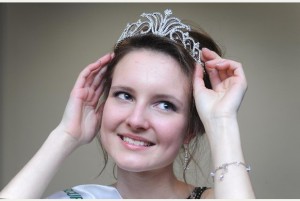 Bethany, who will be officially crowned on Bower Day, won the title of 2014 Lichfield Mercury Bower Queen at a glittering selection night on Sunday at Lichfield Golf and Country Club.

Bethany is a keen member of 1206 (Mercian) Squadron RAF Air Cadets who also enjoys art and karate and is studying for A Levels.

The Cadets wish Pilot Officer Matt Blackwell a successful career as a pilot with British Airways as he hands over to the new Training Officer Richard Hartland. 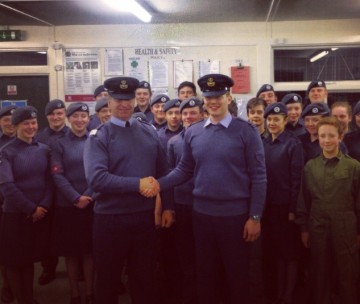 The Corps of Drums were in attendance at 'ATC Sunday' on Sunday 2nd February. The service, held at St Edithers in Tamworth, was attended by members of both flights of the Squadron and joined by other local Squadrons.

In addition to an outdoor display the Corps of Drums also played inside the church. See an exerpt from the display on > YouTube < 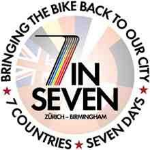 The 7inSeven Cycle Initiative traveled from Zurich to Birmingham and finished at Central Square on Sunday 29th September. Helping to raise £100,000 for the Help Harry Help Others charity, 1206 and 196 Squadron Cadets provided Marshalling for the race and the now famous 1206 Squadron Corps of Drums lead the parade as the riders entered Centenary Square from Broad Street.

Squadron Dining in Night is a huge success!

The Squadron dining-in and presentation evening at the Guildhall played host to a number of distinguished guests including Air Commodore John Gaffney, Mr Michael Fabricant MP, the Mayor of Lichfield Councillor B Awty, The Chairman of Lichfield District Council Councillor D Leytham, Wing Commanders E Sharrard-Williams and S Mills, Major Chris Maycock, acting CO DMS(W) and Commander S Brown. The formal dinner was run exactly as it would be in the RAF and gave the cadets a chance to experience some of the traditions and customs that form the foundation of these occasions. The Corps of Drums were on hand to provide a stunning display that was marked by blue incandescent drum sticks all perfectly lit in time to their first class display.

With the wing media competition success firmly in the minds of the cadets, they have notched up another success by winning the Lock Drill Competition at DMS(W) against 1122 (Marmion) Sqn and 1444 (Brownhills) Sqn. Major Chris Maycock acting CO JSU Whittington presents the trophy to FS Adam Bailey. 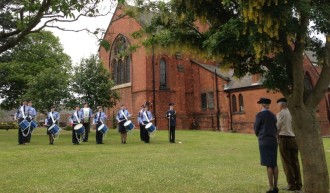 DMS (Defence Medical Services) Whittington held a health fair and invited 1206 Squadron Corps of Drums to perform. Brigadier Young took the salute and many of the RAF personnel came to watch.

Significantly this was the second time the Corps of Drums has performed in front of OC Joint Support Unit, Lt Col Ian Harper, who commented on how well the cadets performed, saying that he believed them to be as good as any military band he had paraded with and felt them worthy enough to play outside Buckingham Palace.